Hallelujah! The Magic of Live Music 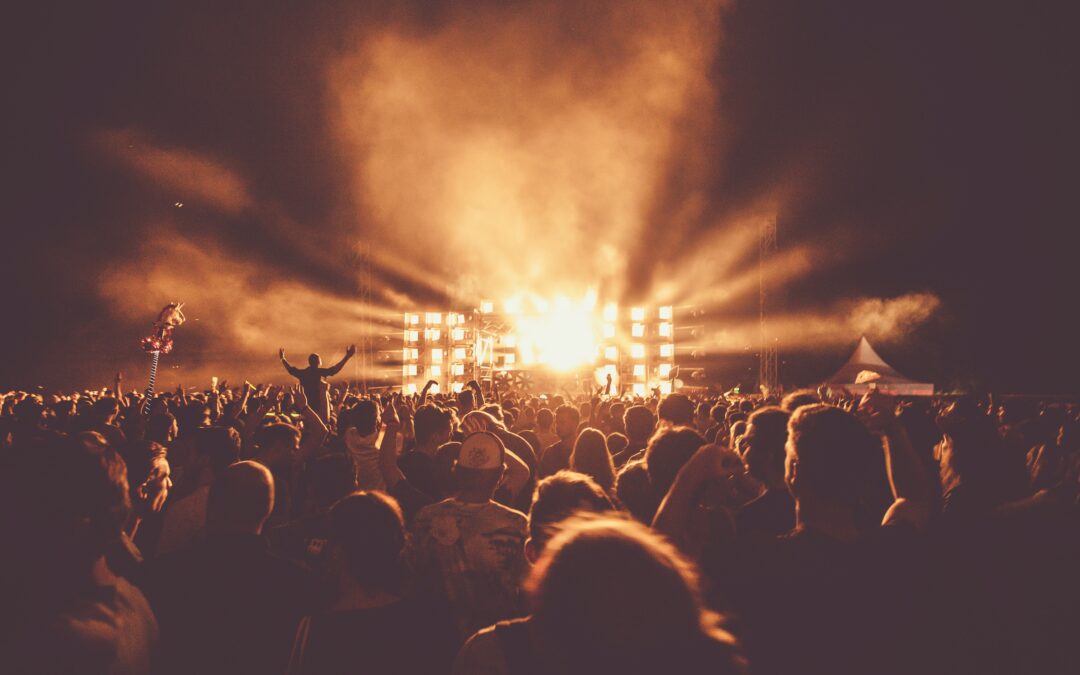 While we wait to hear what will become of the live music industry, I thought I’d take you on trip down memory lane to a moment in time where being in the presence of a legendary band transported the audience to a transcendental place…..

A chilly December night in 2013 saw me, my husband and a friend queuing to get in to the O2 in Oxford. Rather than casually soaking up the atmosphere, I clutched my ticket to see Happy Mondays like I’d won a tour of Willy Wonka’s chocolate factory – such was their impact during my teenage years that I will forever associate them with absolute escapism.

It had been a long time since I’d been to a gig but I’d remembered not to take a coat and to wear a pair of trainers that I was prepared to get ruined. What had changed however, was the mode of transport we used to get there – rather than the sitting on a train drinking cheap lager, we’d driven there in a Ford S-Max filled with the usual detritus of family life. Not very rock & roll.

We get in and there’s plenty of people watching, conversations with random strangers who’ve had something a little stronger than the lager that’s for sale, and a palpable sense of excitement as the lights go down.  And then Bez comes on stage like a magical shaman with a stick in one hand and a pair of maracas in the other. Shaun Ryder comes on next, the beats start and things go a bit weird.  Someone has cast out an invisible fishing line and it has hooked in my cheek – I’m off.

A moment later and I’m zig-zagging through the various layers of the crowd – the patchy bit at the back where you stand and bob your head; the bit in the middle where everyone’s respecting each other’s personal space and getting their groove on and then down to the front where it is heaving and pulsing.  We surge and contract and barge each other, beer splashing, hands aloft, bodies pressed together.  Ribcages are crushed, then released and every now and then a space opens up that’s just big enough for you to dance in – and as it’s Happy Mondays that dance is head rolling, eyes closed, hands reaching and feet stomping then slipping on the slickness of the floor.  There is arm-linking and whirling groups of people creating vortexes that spin off to the side of the crowd before coming back again and crashing into everyone.  It feels like chaos and violence but underneath it all is camaraderie and etiquette.  People look out for each other, help strangers get back up and try not to smash into small women who are having a moment.

A man shakes my hand and I am bear-hugged by another who looks more than a little bit like Buster Bloodvessel – so impressed is he with my enthusiastic mosh-pit participation. Between songs we catch our breath and then ‘Wrote for Luck‘ comes on and we are all chanting “Ahhhhhh-ha-ha”. Someone spills beer down the back of my jeans and I don’t care. My hair is messed up and sticking to my face and I don’t care.  My cheeks are burning and my top half is soaked in sweat because I foolishly wore a jumper and I don’t care.

The Mondays leave the stage, leave my ears ringing, leave the crowd baying for more. A moment later they return to the sound of a monk singing which can only mean ‘Hallelujah‘.  If I was on a higher plain before, I’m checked out now.  We surge as one and I’m forced against the crush barrier, pushing back, placing my arms in the air because there’s nowhere else for them to go, toes trod on, nose full of the smell of beer, sweat and skunk, transfixed by the sight of my teenage idols, transported by the music, solar plexus vibrating in time.  If there’s a heaven then this is what I imagine it to be.

It finishes, I am finished.  I wriggle, push and lever my way between bodies to get to the air and space at the back and a much needed pint of water.  I have paid my respects at the altar of the Happy Mondays, and am ready to return to my grown up responsibility of making sure we’re not too late for the babysitter and putting my stinking clothes straight in the washing machine.

We have had communion, sung together, worshipped and praised.  And then our friend appears with a holy relic:  Bez threw a maraca and it got trapped between the barrier and his chest.  We stare at the golden orb in reverence, touched by the hand of a man who if not exactly a god, is certainly a walking miracle.  Hallelujah!

Like this? Check out my books for more writing on music, family life and moments of escapism.